Turn that Frown into Something Cheesy and Round

So here we are, Blue Monday.

A day claiming to be the most depressing day of the year. An amalgamation of weather, accumulation of debt, time since Christmas, failure of New Year’s resolutions and low motivational levels producing this supposedly dismal date. But how do you tackle a day “scientifically” proven to be so dejecting?

With pizza of course!!

Who better to get in for fresh pizzas than Franco’s Little Kitchen, a dainty three-wheeled wagon concealing a fully functional stone oven. After getting settled at the rear of the car park, Fabio took action to ignite the selection of wooden blocks resembling a well fought game of Jenga. Battling the relentless Oldham wind, the blowtorch finally pulled through and the flame was lit: a much-needed means of warmth on a chilly January morn, and a fuel for the creation of those discs of deliciousness. Now to the first wave: margherita.

A combination of flour and flairs followed, the dough whirling into perfectly rounded platters to house a tomato base and sprinkling of mozzarella. Wielding the bakers paddle, the first pizza was carefully escorted to the mouth of the oven. It was neatly rested in the 400-degree heat, being carefully monitored as it quickly became its final form. The soft sound of footprints in the distance broke the crackles from the embers.

After discovering that no pizza cutter could be found, the pizzas were encased in their cardboard shells, ready to be transported back to the office where Rebecca took charge of the slicing. A constant barrage of orders followed. Pepperoni, Meat Feast, BBQ Drizzle, Veggie Delight and a uniquely named ‘Hot in Here’. There seemed to be no end to the orders and no space in the oven, as pizzas were left to wait on the edge of the mouth. After an hour of constant cooking, the deed was done: the Webbies were fed.

But was there really a need for all the pizza?

Well, not only does it act as a motivational boost for everyone present, it also allows us to access an issue hidden from most people’s view. It brings people together, allowing us to vent and focus on a serious underlining topic: depression. Yes, this day may have been labelled Blue Monday as a publicity stunt by Sky Travel in 2005, but it does draw attention to an extremely important topic rarely touched upon.

Depression is a very common mental illness, even more so around the winter period. Most scientist believe the reason behind more and more of us gaining these ‘winter blues’ is down to the way our bodies respond to the amount of daylight. Alison Kerry, who works for the mental health charity MIND, says:

“With Seasonal Affected Disorder (SAD), one theory is that light entering the eye causes changes in the hormone levels in the body. In our bodies, light functions to stop the production of the sleep hormone melatonin, making us wake up. It’s thought that SAD sufferers are affected by shorter daylight hours in the winter. They produce higher melatonin causing lethargy and symptoms of depression.”

So, what can we do to help each other get through it?

The first and most important thing to do is to talk. Even though this may seem like a simple task, it can often be one of the most difficult things to do. As someone who has been through the struggles of depression first-hand, my biggest step to regaining a healthy and positive mind was to talk about how I was feeling. I was in an extremely bad place, feeling worthless and like I only wanted to shut myself away from the world. Don’t get me wrong, it was one of the hardest things I’ve had to do, especially discussing it with my mum who is one of the closest people to me. However, the sense of relief by just talking about what was going on was overwhelming. I didn’t feel like I had this negative weight overpowering me and dragging me down. I felt like I could get back to being me.

Instead of keeping everything bottled up and to yourself, it is much better to talk about what’s going on. It helps to reduce the feelings of anxiety and stress, and lets you truly feel like you are not alone. Yes, it may be a very hard step to take, but by either helping someone talk about it or taking the plunge yourself, it can really make a difference.

There are also a number of other ways in which you can beat SAD. If the darker days are an influencing factor towards the winter blues, then more light is needed. So get up and get out there by keeping active. As well as increasing those melatonin levels, you are also changing the level of serotonin in the brain. Serotonin is the mood-regulating chemical which effects how we feel. Dr Andrew McCulloch, the former chief executive of the Mental Health Foundation, stated:

So a change of scenery and getting out there can be a double whammy in helping to fight off those negativities in your life. They also help with the last step which the NHS advises to help increase positivity: Eat yourself happier.

That’s right, the NHS says that comfort eating does make people feel a lot healthier mentally, which is a great excuse for all the pizza that we ate! Of course, you do have to make sure that you are hitting your 5 a day. Too much sugar and carbohydrates can end up making you feel bad about yourself, so it’s best to make sure that you aren’t forgetting to include plenty of fresh fruit and veg in your diet.

Just remember, “Blue Monday” is a made up day. We have the ability to change how we feel and shouldn’t be too influenced by the media. Now get out there, socialise with friends, do something crazy and have your cake pizza and eat it! Even if you feel it, you are never alone; there is always someone there to lend an ear. 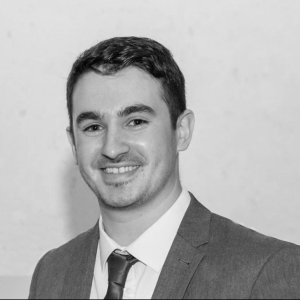 Luke is an experienced designer with a key focus on UX/UI and digital accessibility. Luke is passionate about mentoring young people and working with schools to ensure youth skills development.
PrevPreviousSilver Accreditation from Investors in People
NextBusiness vs. CompanyNext
Find out more about our services, products or read more about us.